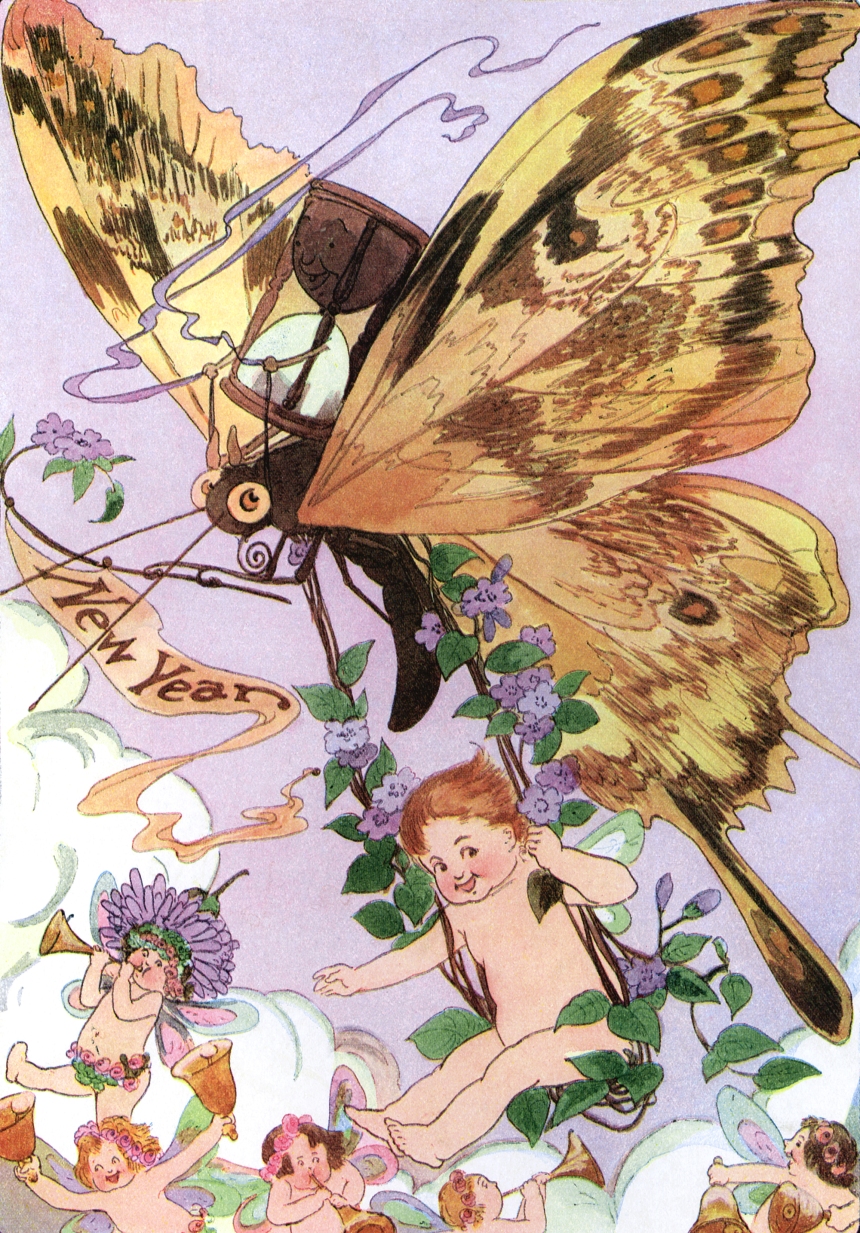 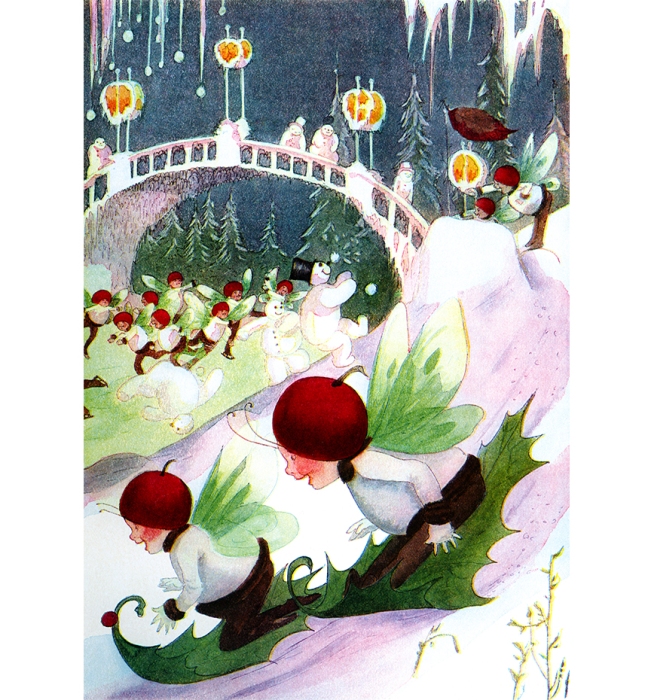 Jacky shall have a new master:

Jacky must have but a penny a day

Because he can work no faster.

Come play with me,

The sunshine’s warm and clear;

You need not fear

The winter is not near.

I can’t be stayed,

I must not lose to-day.

For time, you see,

Won’t wait for me,

But sweeps the flowers away.

“Jimmie,” said his brother Tom, as he gave the fish to his mamma, “let’s play we are sailors. We can use mamma’s tubs for boats, and fasten our flags onto them.”

“All right, Tom,” returned Jimmie, “we will play the tubs are battleships, and that we are the captains, and we can pretend to shoot big cannons at each other.”

This was great fun, and went along nicely until Jimmie got so excited that he tipped over his boat, and then there was a great squealing.

The Tale of Jimmie Piggy. 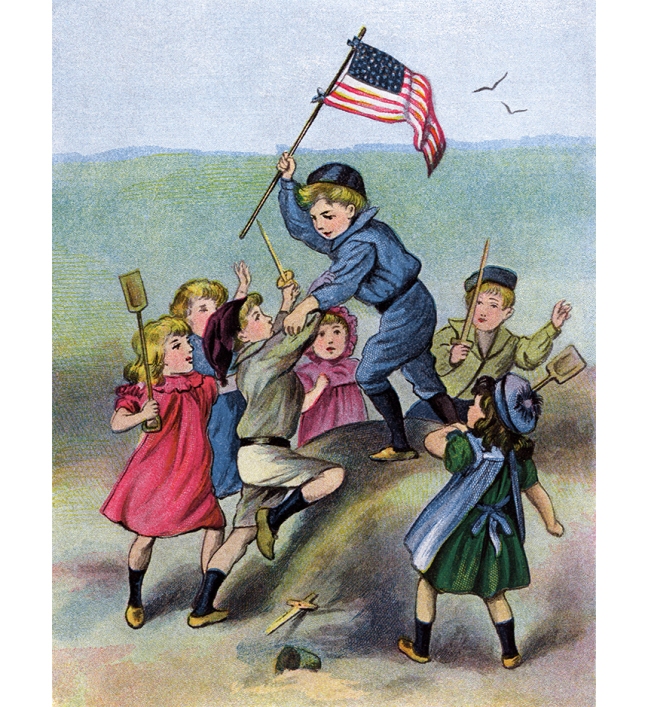 Holding Down The Fort. 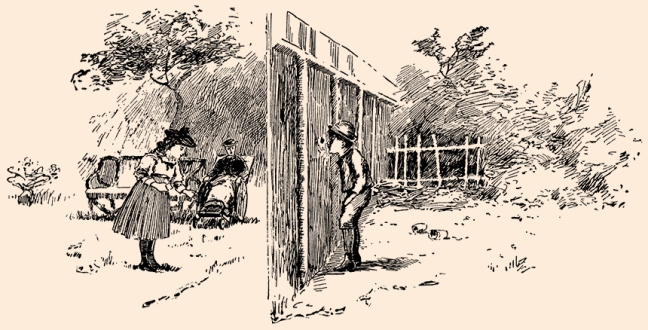 TED HAS A WICKED THOUGHT.

From the story “THE KNOT-HOLE IN THE FENCE.” 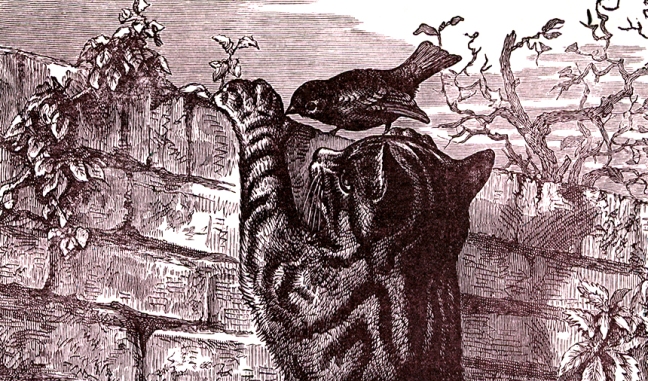 What do you think of that?

A bird in love with a cat.

This picture you see,

Is as true as can be;

At the risk of a fall,

To visit her friend

On the top of the wall;

They’ll romp in this way,

Then the cat will go home,

And the bird fly away. 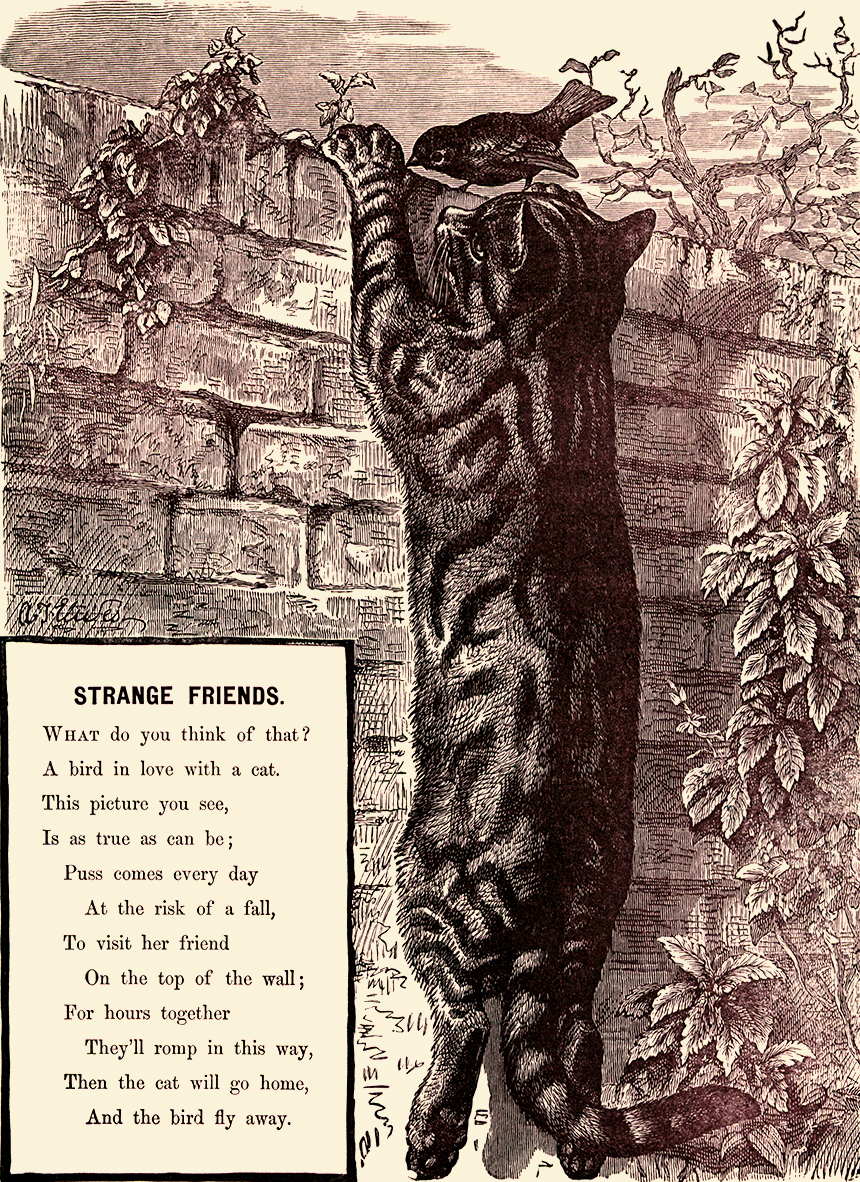 IN SCHOOL AND OUT.

When Jumbo was young and went to school

He soon found out this golden rule,

“Work when you work – play when you play,

That is always the wisest way!”

For if you play in school, mayhap,

You’ll have to wear a dunce’s cap;

And he who can’t his lessons say

Will have to work while others play!

So Jumbo first his lessons learned,

And then went out, his playtime earned,

And if an Elephant can be so wise

I’m sure a small boy can if he tries.

“Get Off The Tracks.”

“I HAD A COMFORTABLE SEAT ON THE WALL.”

Presently they began, and it was one of the funniest things I ever saw – to watch Augustus Ham jumping up and down trying to hit a shuttlecock; he couldn’t play the least little bit; why, even Major Porker couldn’t help smiling

From the story “The Extraordinary Adventures of Dicker and Me.”

PETER PIPER’S PEEP SHOW or All the Fun of the Fair.

Billy Meets The Ace of Spades. 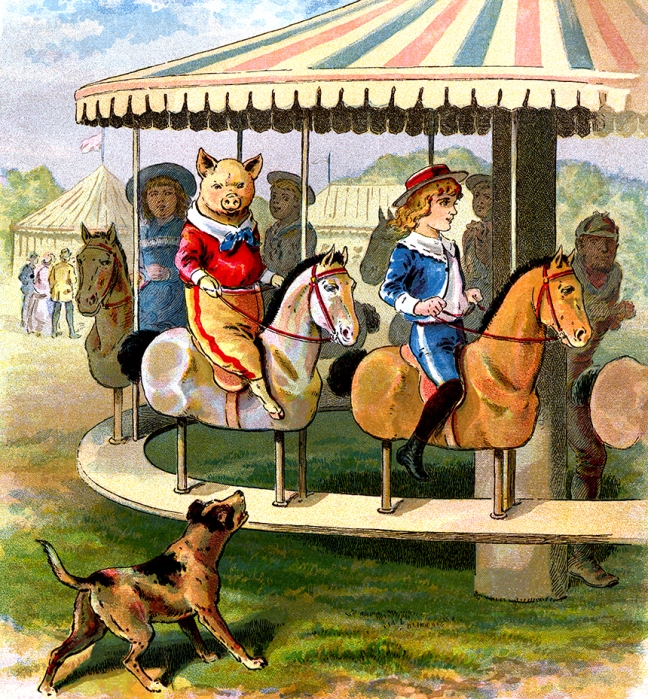 The next day the wolf came again, and said to the little pig, “Little pig there is a fair at Shanklin this afternoon; will you go?”

The Story of The Three Little Pigs.

“Stuck their whole head into it.”

When the calves were a little older, the farmer tried to teach them to drink out of a pail, but they either upset it, put their foot into it, or stuck their whole head into it so deep that when they came out even their eyes were filled with milk. 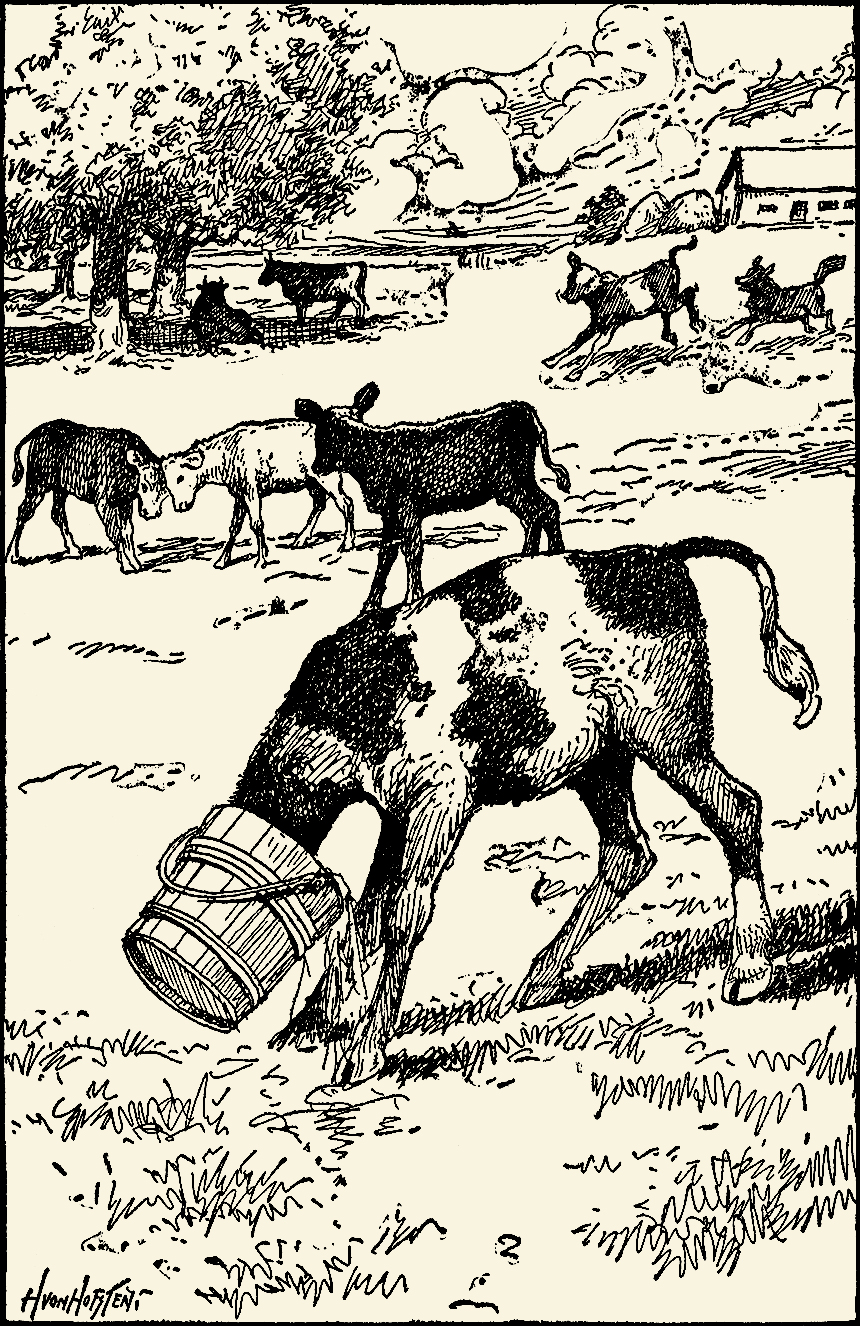 About a pretty dog I have to tell, –

A Maltese dog, so curly, white, and fluffy;

His nose was pinker than a pink sea-shell,

His eyes were also pink, – his name was PUFFY.

When he was six weeks old, quite small and scared,

He came unto the house of his new Missis:

His teeth were sharp, he bit so hard,

She cried, “Oh what a charming doggie this is!”

When Puffy slept he rolled himself up tight,

He used a large round stool to roll and bite,

Which on the floor his Missis used to trundle.

The good old man lay upon the floor crying; he was really shot in the heart. “Oh!” he cried, “what a naughty boy this Cupid is! I shall tell all the good children about this, so that they take care never to play with him, lest he hurt them.”

THE EDGE OF TOWN

The grape-arbor with its cool green leaves and long twisty vines and roots was an ideal place to play Dragon in. If you stretched your imagination just a little bit you could find fierce and fiery Dragons in the scaly gnarled roots of the vines.

Soon they will sup from a beautiful dish,

Modeled in clay, on tortillas and fish.

Then, when the stars are all lighted, perchance

Off they will run to the plaza to dance.

Songs in their hearts and sweet bells on their clothes;

Gay little Mexicans, give me a rose! 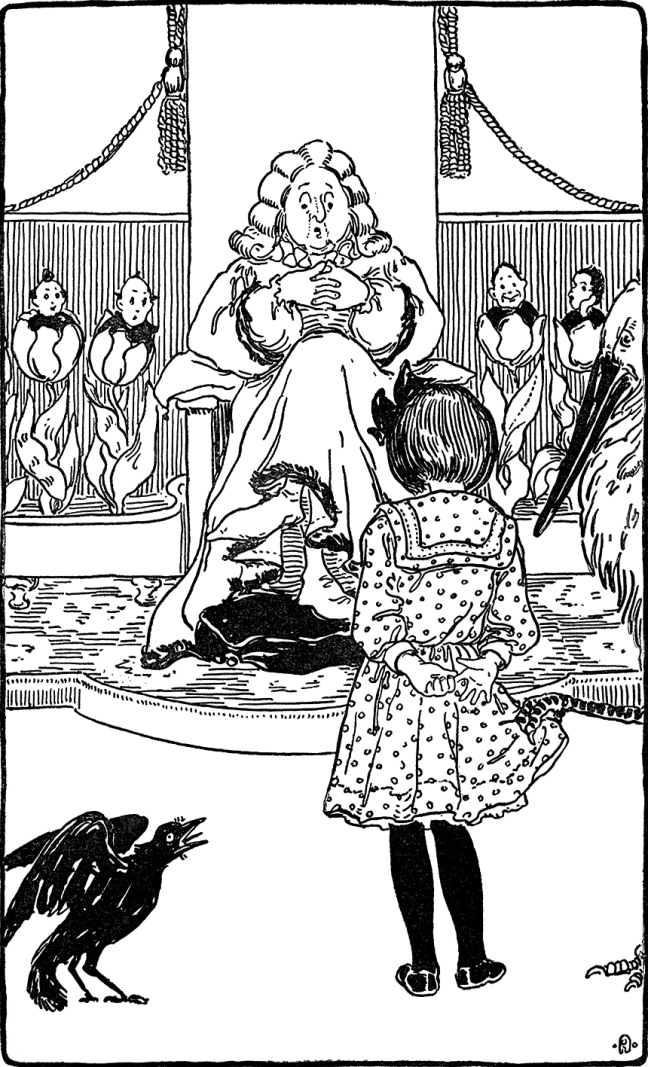