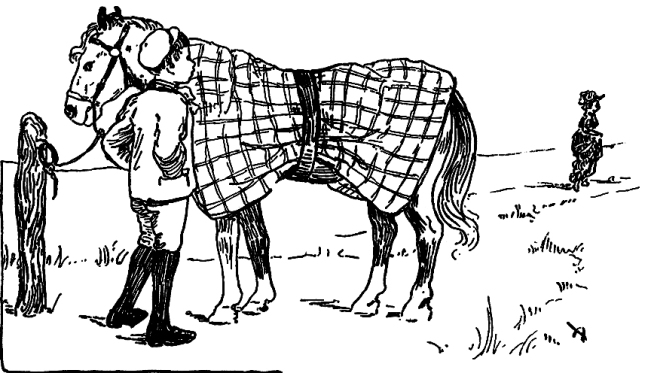 I had a little pony,

His name was Dapple-gray,

I lent him to a lady,

To ride a mile away;

She whipped him, she slashed him,

She rode him through the mire;

I would not lend my pony now

For all the lady’s hire. 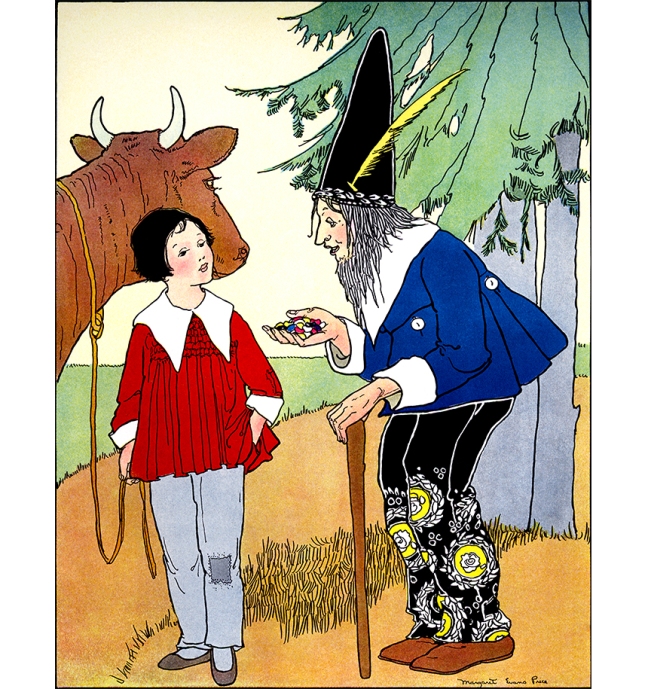 I’LL GIVE ALL THESE BEANS FOR YOUR COW.

From the story “JACK AND THE BEANSTALK.”

THE CAT AND MOUSE IN PARTNERSHIP. 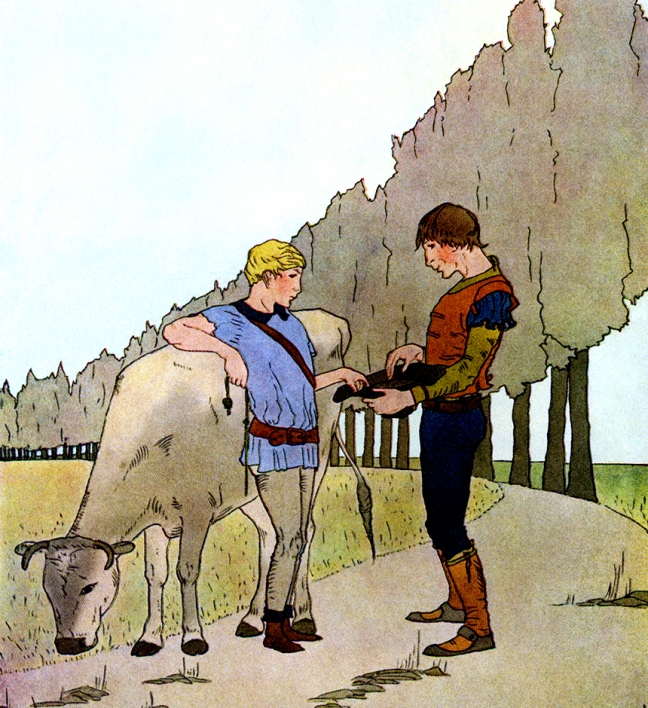 “THE BUTCHER OFFERED ALL THE BEANS IN HIS HAT FOR THE COW.” 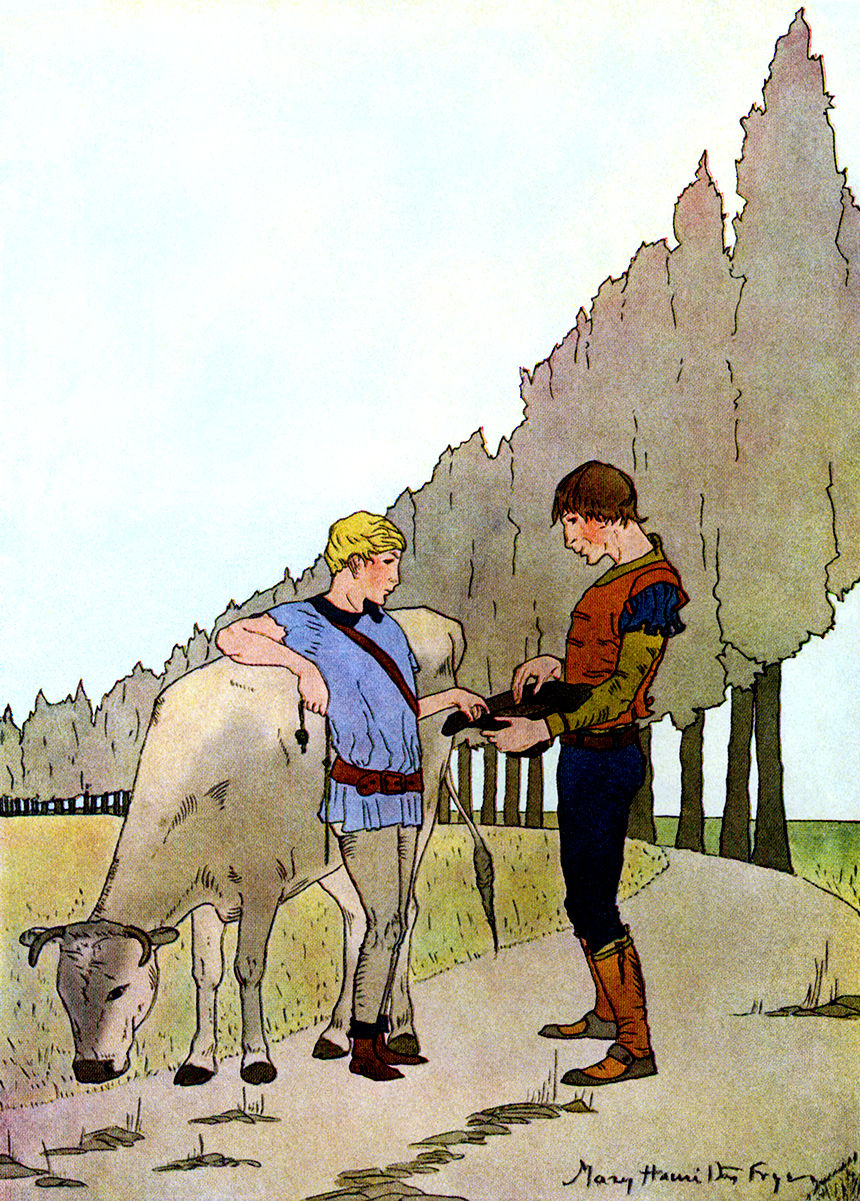 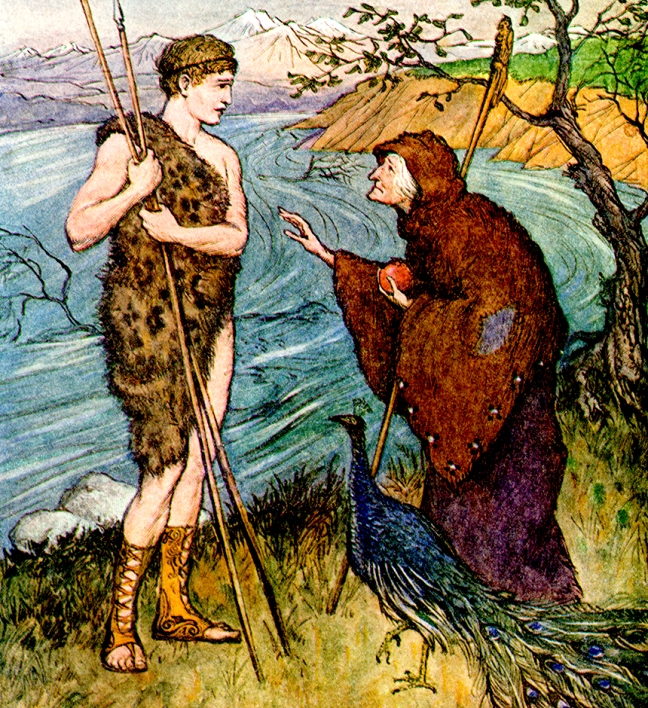 “I am going to Iolchos,” answered the young man.

Jason looked round greatly surprised, for he did not know that anybody was near. But beside him stood an old woman, with a ragged mantle over her head, leaning on a staff, the top of which was carved into the shape of a cuckoo. She looked very aged, and wrinkled, and infirm; and yet her eyes, which were as brown as those of an ox, were so extremely large and beautiful, that, when they were fixed on Jason’s eyes, he could see nothing else but them. The old woman had a pomegranate in her hand, although the fruit was then quite out of season.

“Whither are you going, Jason?” she now asked.

She seemed to know his name, you will observe; and, indeed, those great brown eyes looked as if they had a knowledge of everything, whether past or to come. While Jason was gazing at her, a peacock strutted forward, and took his stand at the old woman’s side.

” I am going to Iolchos,” answered the young man, “to bid the wicked King Pelias come down from my father’s throne, and let me reign in his stead.”

“Ah, well, then,” said the old woman, still with the same cracked voice, “if that is all your business, you need not be in a very great hurry. Just take me on your back, there’s a good youth, and carry me across the river. I and my peacock have something to do on the other side, as well as yourself.”

“Good mother,” replied Jason, “your business can hardly be so important as the pulling down a king from his throne. Besides, as you may see for yourself, the river is very boisterous; and if I should chance to stumble, it would sweep both of us away more easily than it has carried off yonder uprooted tree. I would gladly help you if I could; but I doubt whether I am strong enough to carry you across.”

“Then,” said she, very scornfully, “neither are you strong enough to pull King Pelias off his throne. And, Jason, unless you will help an old woman at her need, you ought not to be a king. What are kings made for, save to succor the feeble and distressed? But do as you please. Either take me on your back, or with my poor old limbs I shall try my best to struggle across the stream.”

Saying this, the old woman poked with her staff in the river, as if to find the safest place in its rocky bed where she might make the first step. But Jason, by this time, had grown ashamed of his reluctance to help her. He felt that he could never forgive himself, if this poor feeble creature should come to any harm in attempting to wrestle against the headlong current. The good Chiron, whether half horse or no, had taught him that the noblest use of his strength was to assist the weak; and also that he must treat every young woman as if she were his sister, and every old one like a mother. Remembering these maxims, the vigorous and beautiful young man knelt down, and requested the good dame to mount upon his back. 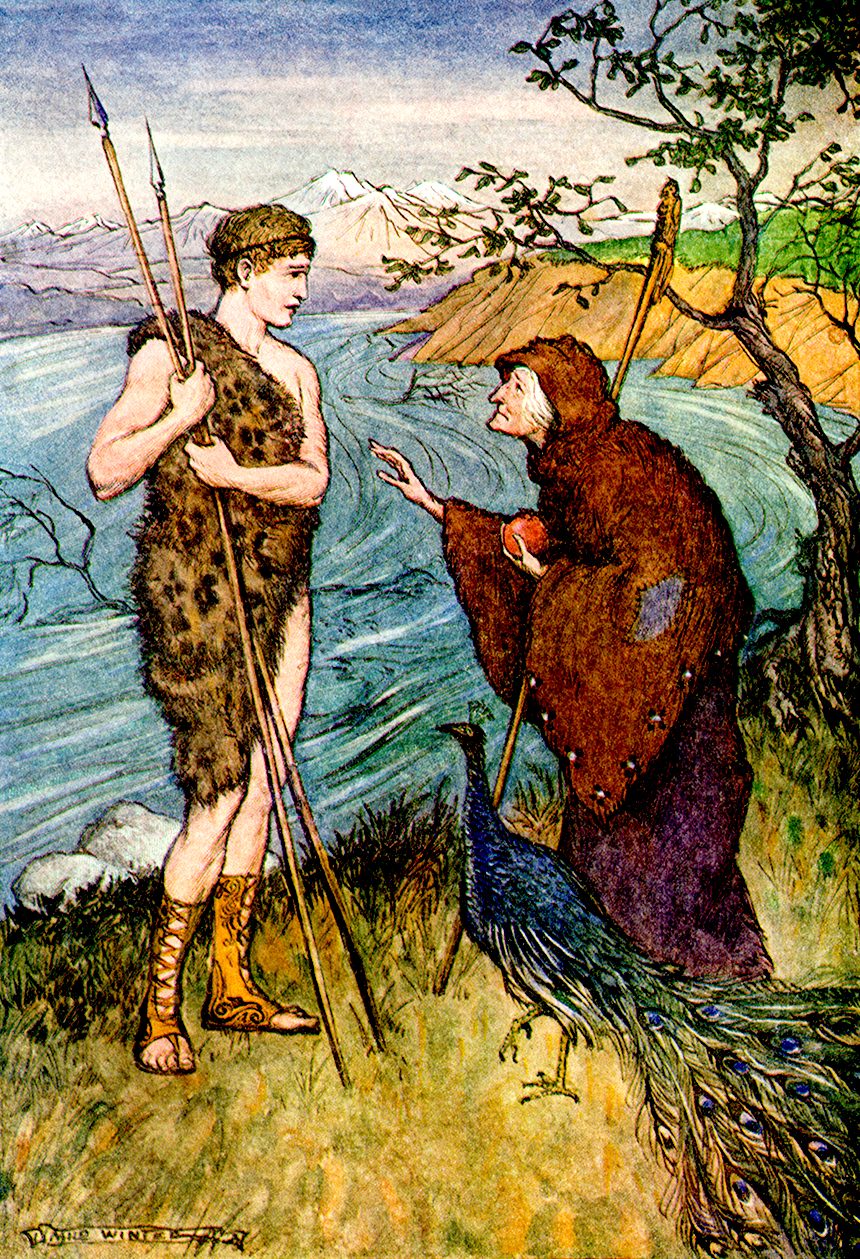 From the story “The Golden Fleece.”